How I Got Back On Track With Writing Resolutions

At the end of 2013, I am sitting at my computer, wondering how to sum up the year and whether or not I should set some goals for 2014.

Why did I fail to reach so many goals in 2013?  Was it because I took too big a bite, trying to do NaNoWriMo, and an online magazine column, two novels, three blogs, and a book of flash fiction stories?

Was it because of my body betraying me in a number of poor health ways?

Was it because I couldn’t get organized and had a mess on my desk and a clutter in my head?

As I ponder, I decide that each of the above reasons had something to do with falling woefully short of my goals. A small something.  How did I arrive at that somewhat startling conclusion?  Because I have really wanted to accomplish something in the past…a number of somethings…and ended up finishing them ahead of time.  Each of these goals had been as big as 2013’s targets.

The key here was “wanting.”  I really wanted to accomplish them.  So did that mean I didn’t want to accomplish my writing goals for the past year?  No.  I definitely did want to finish my Nano entry and ended up in emergency instead.  The entry was the sequel to my published novel Witchcanery.

I had, in the past, had customers (fans) who made me promise that I would write the sequel to Witchcanery before they agreed to buy it.  They had read the dust jacket and wouldn’t even start such a “fascinating book”–their words, not mine–unless I agreed to do the sequel.

So the sequel had been in the works for several years and I had promised myself that 2013 was the year Witchcanery, Baby! would explode into being.  (As you probably know, you have to complete 50,000 words before you achieve the NaNoWriMo goal.) I got as far as 22,000+ words before Mother Nature pulled the plug on me.

And seconds after writing those last words, I received an epiphany.  There is a difference between “wanting” and “being dedicated to.”  And therein lies the difference.  I have been dedicated to accomplishing many things in the past, and EVERY SINGLE ONE was accomplished.

These goals ran from marrying the man I love, to finishing, editing and publishing my first book (which happened to be Witchcanery).  I have wanted many things in the past (and many of them were important) things like pierced ears (ouch!), continuing my volunteer work, losing weight…some I achieved or received…others I did not. 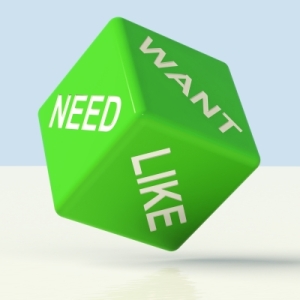 Now, here’s the kicker.  I felt fulfillment for EACH dedicated goal I achieved. Not many of them gave me real satisfaction if I achieved them.  I wanted a couple of writing courses, which I acquired after a small struggle.  I was sorry I had spent my money on them.

So what does this discrepancy mean to me?  It boils down to one thing for me.  It’s the difference between needs and wants, as simple as that.  And something I have know about since I was in my 20’s.  If I perceive it as a need, even subconsciously, then, being the survivor that I am, I will make sure I accomplish it.  If it’s only a want, I will prioritize it as to how badly I want it.  Even then, there is no guarantee I will get it.

So I’m sitting here, feeling a tad smug for having figured out what went wrong in 2013 (and quite likely how I messed up with my goals in other years).  I have a chance to right all the wrongs, like Ebenezer Scrooge after the visit from the Ghost of Christmas Future.

So the first thing I will put on my list for 2014 is completing Witchcanery, Baby! You want to know what happened there?  I was trying to complete it in 2013 for the wrong reasons…because fans wanted this sequel, because I had written in some parts for friends whose husbands had passed, and it was very comforting to them.  So I had to finish it, right?

Wrong!  It’s like dieting.  If I try to lose weight because my husband wants me to, or my kids, or my best friend (for some strange reason), then it’s not for me.  Body weight is personal…so is writing.  If I finish a story because I NEED to, then I have the write…er, right…of it.  And now, all the other reasons don’t matter.  I know I need to finish this story.  I can hardly wait for Dec. 31, 2014 to find out if it worked.  I’ll keep you posted.

So, how about you?  What keeps you from accomplishing your New Year’s Resolutions or any goals you decide to earmark for completion?  Here’s a post by Daphne Gray-Grant that I just read about using the right word when making goals.  I think it might help.